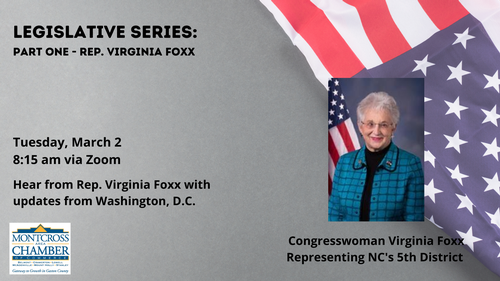 Event Description:
Join us for a Zoom meeting with Congresswoman Virginia Foxx. Hear updates from Congress and what is happening under the new Administration.

Congresswoman Virginia Foxx represents North Carolina’s 5th District in the United States House of Representatives. Throughout her time in Congress, Foxx has established herself as a champion of conservative values and has helped lead the national movements to reduce federal government spending and increase government oversight and accountability.

The nonpartisan magazine National Journal has consistently ranked Foxx as one of the most conservative members of the North Carolina Congressional Delegation. She also has a lifetime 96 percent approval rating from the American Conservative Union.